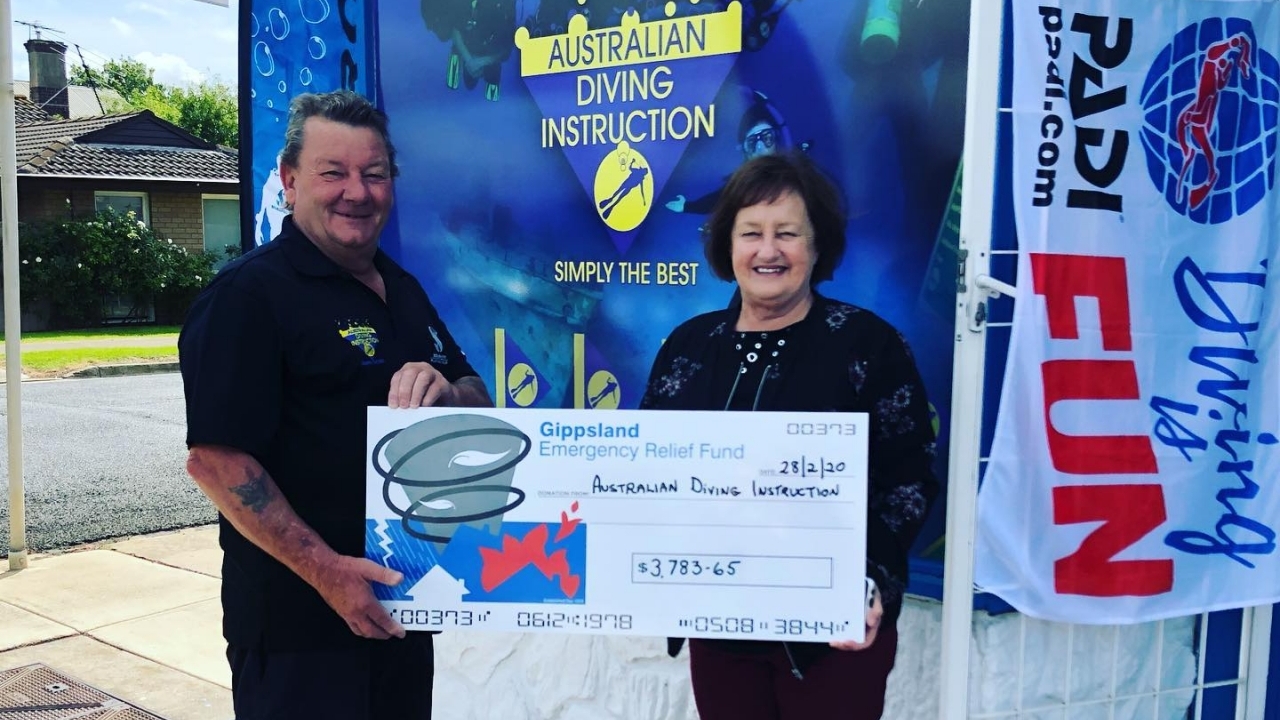 We raised a grand total of $3,783.65! The amount was donated to Gippsland Emergency Relief Fund.

The bushfire season began sometime in September 2019 when several bush fires started burning in
some parts of Australia. Fuelled by years of drought season, the fires escalated uncontrollably and
damaged hundreds of properties, claimed human and animal lives, with some animals driven to near
extinction.
Australian Diving Instruction (ADI) and its members decided to host a charity event to raise money
and help those who have been affected by this great tragedy.

How It All Happened..

The idea to do an event like this came from Kathleen Mabbett (Stephen Mabbett "Steve's" wife)
during one of our lazy post dive conversations at the shop. She suggested we organise an event and
help those who are less fortunate and involve the club members for help. With the bushfire burning
ferociously across Australia, we decided to do it for the victims of the fire.
Of course, an idea is just an idea until it's put into action. So, we began brainstorming. What can a
group of divers do (besides dive)? Sell underwater photos? Create personalised calendars
showcasing underwater world? We needed something to get every single one involved.
During one of our monthly club nights, we discussed some ideas on how to go about with our
bushfire appeal. A lot of ideas were thrown in. Members were very eager to help out and participate
in any way they can. Some offered to contact organisations and businesses, while others offered to
try and get their work company to donate. But honestly? I thought most were near impossible to
accomplish. One thing was very clear to me though; They were very determined and driven to
contribute. And so, after brainstorming comes putting plans into action. Members and Steve started
phoning minor and giant companies and, ever so slowly, things started to fall into their rightful
place. Evren Velisha, a member who runs a vegetable farm, generously suggested he will donate
some of his cropping. Carrol Murphy, a cake decorator, offered to bake cupcakes to sell and Steve
offered to cook sausages on bread for a gold coin donation and he also got his mate Jack Reynolds
from Australian Mussel Farms to donate mussels! This was how part 1 of the event formed; the
"bushfire appeal market". (It was held at St. Leonards Pier).
From then on, offers just flowed. Some members who contacted their friends who own businesses
to help got back to me with news that they were going to donate. Steve donated a diving course, we
collected squidjigs and sinkers whenever we went out to dive. And with so many more offers from
various businesses, we decided to have an auction, part 2 of the event, open for both divers and
non-divers.

Club members arrived very early at St. Leonards Pier to help set out the market, bringing marquees,
tables & chairs. But of course, the event came with a challenge. Our little market needed a nice day
to ensure people are out and about, because without a little crowd, how will we sell our sausages,
veggies & cupcakes? Then it started to rain! People scattered out to take shelter. With so many
vegetables and cupcakes left to sell and dwindling opportunity to sell them, we thought, "how can
we possibly make a sale now?" That was when one of our very last customer suggested we drive to
the caravan park where she's staying and sell them for a donation. And so, Evren & myself decided
to drive around the area and sell as many vegetables as we can manage while the other members
stayed put to sell more sausages, mussels and second hand squidjigs (collected underwater during
dives). And with the rain pouring, we couldn't go through with the auction. So it was decided the
auction be held online.
We have the following sponsors to thank for their kind donations.

The club and its members were able to reach out to various organisations and businesses.
The online auction raised a total of $2,754.00.

We raised a grand total of $3,783.65! The amount was donated to Gippsland Emergency Relief Fund.

On behalf of ADI and its members, we would like to thank each and every one of you who got behind
this great cause and made it into a success. We could not have done it without you.